An adventurer at heart, David grew up in a conservative Christian environment and spent much of his early life navigating the challenges of connecting with his family as a gay man. He attempted to compensate for his personal wounds by relentlessly pursuing his professional goals.

David eventually acknowledged a fundamental misalignment between his passions and the tightly framed nine-to-five workflow he had built himself into. Having a real heart for people, David got into coaching to help visionary leaders release their own personal wounds, and create clarity around their unique contribution to the world.

Partnered With Red Cape On: March 2021 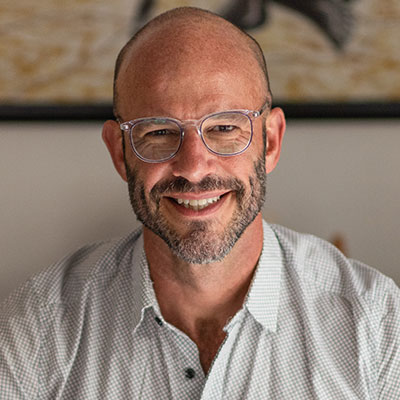 What challenge did David want Red Cape to address?

When David entered the coaching world, he gravitated toward his natural strengths; playing it by ear, and being proactive and responsive to the world. In some ways, he regarded detailed planning as a handicap that would take away from his instinctive entrepreneurial chops.

As his business continued to grow and attract more clients, David realized that some measure of planning and structure was integral to its stability and success.

Why did David face this challenge?

Having had a conservative upbringing that required a lot of scheduling to connect with his family, David developed an aversion to planning in his professional life. He likes to describe his MO as “flying by the seat of his pants.”

On his journey to self-awareness, he realized the need for a partner who could take on the planning, admin, and operations arm of his business to allow him the time and space to run freely with his natural talents.

What were the initial solutions David tried prior to Red Cape?

Prior to partnering with Red Cape, David spent a year taking a stab at different ideas; often chasing down trends he saw new coaches and entrepreneurs advocate.

He spent a significant amount of time worrying about his website and business cards – tasks that took away from running his business. David says, “I was so focused on the superficial things of looking like a company rather than functioning like a company.”

As he soon realized, this learning curve was not only steep but a distraction. David spent an extraordinary amount of energy leaning into areas that were not his expertise, and could not produce the desired results.

Why did David choose Red Cape?

David was introduced to Tiffany through Karen Cappello; an Executive Coach and Mentor. He initially engaged Red Cape to handle his social media and contracted out his web design and development to a freelancer.

His original conception was that he would act as a mediator between all these moving parts and take on that aspect of project management. David quickly learned that Red Cape performed this exact function under one roof, saving him a lot of time and obviating the need for multiple sub-contractors.

How did Red Cape help David solve his challenge?

For David, Red Cape was able to step in as a behind-the-scenes partner to enable him to operate from a place of proactiveness and passion, and let go of the things that were detracting from his energy.

As he re-organized his chain of command, David had Red Cape take over his social media, web design, and business card design in those early months.

Red Cape proved to be the partner David needed to flourish in his Zone of Genius. He found immense value in connecting with a group of professionals who had a lot of experience supporting other coaches in their business.

How did the solution impact David’s business?

David says: “There’s a sensation I have after a really awesome session with a client and I see their face light up or I see it’s almost like punching a hole in the universe.”

David now finds that his desire for contribution is being fulfilled. He is able to focus on improving his business presence and how he shows up in the world. Red Cape was able to take his vision and put it into a framework to allow David to seamlessly channel his vision and energies through that specific lens.

What was the timeline of the solution?

With his social media alone, David’s Facebook reach grew by 100% in the first 3 months. He was also able to see a 1777.78% increase in his audience engagement.

Were there any surprising benefits that David was also able to receive with Red Cape?

Having originally signed on for social media, David has found that his social media strategy has become an outgrowth of his heart’s desire for other areas of his business. He was able to start a much bigger conversation with Tiffany about putting his personal finances and business in order for long-term stability.

Were there any additional services that David has signed on for?

David has since expanded his involvement with Red Cape. He is now freely exploring other entrepreneurial aspects of his business and creating continuity around them with the structure and accountability Red Cape provides.

He was able to build clarity around all of these separate functions; finances, accountability, social media, honing in on his client niche, and receiving the support to thrive in his Zone of Genius.

What are the long-term benefits that David anticipates with Red Cape?

David says, “The real development is in my personal relationship with selling my business to clients. Red Cape has given me a structure on which I can build greater confidence in myself and in the pragmatism or the practicality of my efforts towards building a client base.”

He is enjoying a steady and recurring influx of clients through his periodic group programs that give him sustainability in his workflow.

Moving from a “one and done” mindset, David is hitting his cadence with being able to grow his business with ease, and finding his peace in a very empowered space.

David Kincaid continues to do amazing work as a Transformational Coach. He helps visionary leaders create clarity around their high-impact work, and bring their core talents, passions, and visions into alignment to build a fulfilling life.